Barnaby Joyce gets his girlfriend a job.

Anyone who’s in a position with enough power to do such a thing most likely would.

Im pretty sure if it was Barrack Obama who created some sort of pencil sharpener role when he was in office for his eldest daughter, no one would care.

Just because Barnaby Joyce broke up with his wife and slept with another woman does not give the media the right to jump on top of every single movement he’s made that indicates the slightest possible hint of human error.

I’m pretty sure 99 per cent of men who break up with their partners move on pretty quick. Why shouldn’t they?

It’s been reported Vikki Campion, who is expecting her first child with the deputy Prime Minister, was given a high-paying role as a senior advisor working on digital and social media for Resources Minister Matt Canavan 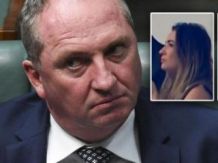 At least he cares about her. You don’t just do these things for women you sleep with. Its a relationship, he’s allowed to have one.

It just goes to show, it’s all about who you know. It wouldn’t be the first time someone landed a job because they knew the boss.

I got my job through a friend of a friend. And I know that there are a lot of other people who have landed roles like this too.

It sucks, but it is what it is.

It’s not just a coincidence that LA’s biggest names happen to run through generation after generation.

And be honest. If anyone was running their own store and their partner (or knocked up girlfriend) needed a job, you would make one up for them too, if you could afford to.

But most of us are not in a position to do such a thing, and therefore it’s ok to splash it all over the media, right?

I think he did a nice thing, by getting his knocked up girlfriend a job.

I wonder if I should have a crack at political reporting because I wouldn’t mind being knocked up and given a job either.

I wonder if it comes with a travel allowance.

I think the bigger issue is that he was actually able to do it. Because of course you would try. 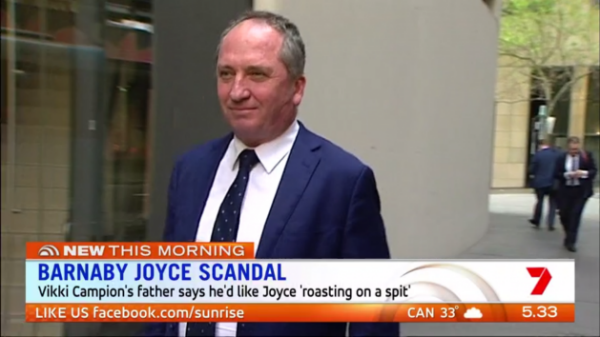 If this is a ‘scandal’ then every man in the country who has ever slept with someone in their office is scandalous. Or completely normal. You decide.

It’s like when you take advantage of the perks of a job. Ordering the most expensive bottle of wine on a ‘business lunch’, handing out corporate seats for a concert to your friends rather than your peers, using the printer at work for personal documents. If you can get away with it, why not?

Someone in parliament (*cough Malcolm Turnbull) should have flagged it and gone, “Hang on Mr Joyce. Do we really need a new Senior Advisor?”

It does seem unfair that all these people are being let go, and well this woman basically let Barnaby in (literally), and she’s landed a job.

All this hype, because she was also being paid with ‘tax payers money.’

Well, how else would they pay her? Do people know what else tax payers money is going towards?

The ‘disabled’ and the ‘job seekers’ who are perfectly capable of work but also perfectly comfortable taking our money while they fake sign job seeker diaries.

I mean, at least his girlfriend was earning her money.

And with a boyfriend like Barnaby, I’m pretty certain she did not have to work at all to put a roof over her head.

I just think it’s time to move on.

Go find another politican to annoy, because there’s plenty of them.