First day on the job… and they send me to the scene of a stabbing.

And just the way my editor mentioned it to me….

Like, there was a tour of the office, followed by some training with the software program they use, and then “Hey Danni, we just have a photographer coming to pick you up to go to Fairfield where there has been a stabbing.”

Their logic- Because I covered my entire paper in Bordertown, I would have plenty of experience in all areas of reporting, including crime.

While this was true, I had to explain to them that the extent of a serious crime in Bordertown was letting tyres down on a tractor.

I mean, ok there was that one time when a cow was shot (I’m not even joking) but it’s not like I would have attended the scene of the crime, unless I was out of milk and wanted to refill from the cows friends who would have been in mourning so that may not have even worked.

So anyway, off to the stabbing I go. And BOOM front page splash on my first day at the Bulletin. 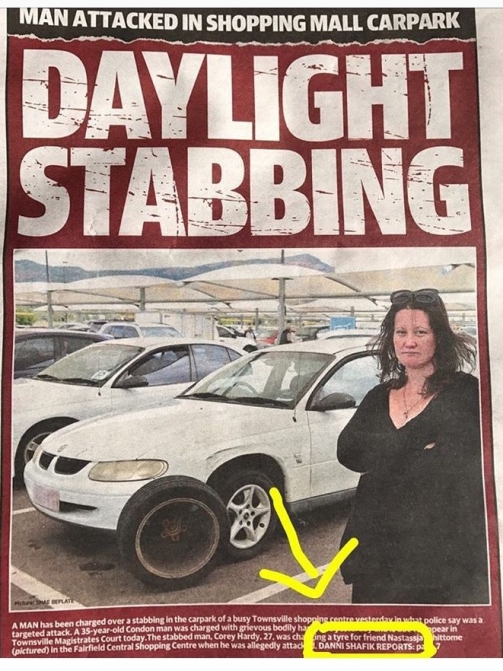 Although we arrived two hours after the incident, it just happened to be the same time that the witnesses were getting back from giving out police statements. And these witnesses were not bright at all and once they started talking, they would not stop!

I came back to the office with material that was absolute gold.

And the next day they send me to a press conference about a sexual assault on a young girl. Suddenly I’m an expert?

The other attendees were TV reporters. So there I was in rubi shoes, my tempt trousers and kmart shirt and a notepad and these CUE, napoleon, mimco mannequins with microphones just towered over me in Tony Bianco heels (I don’t even know if that is a brand to be honest…sounds like it should be. I dunno.)

And, these reporters….not so bright! Their questions ‘Are you just mortified?’

Of course the cop is mortified! Whats he going to say? ‘Nah, not really just a sex offender on the run. No biggie.’

And ‘Are police looking for the offender?’

Seriously?? ‘Nah, we might just let this one get away….’ What a dumb question!!

How about: ‘Where was the incident?” and “Who alerted the police to the assault?’

Those were my questions haha. I wasn’t planning on asking any but because the reporters ones were so damn retarded I needed more info for the story!

Must be something in those CUE dresses that is seeping into their pores and killing their brain cells.